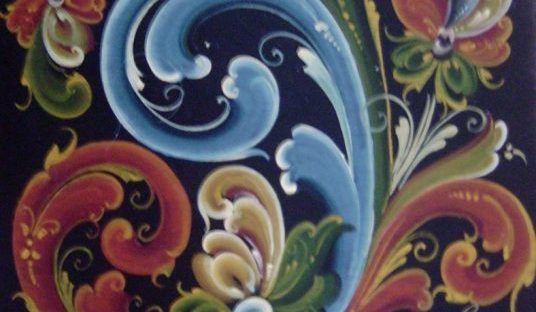 Rosemaling is a little known traditional art form unique to Norway and is characterized by stylized flowers and ‘c’ and ‘s’ shaped scrolls, inspired by the Renaissance and Acanthus motifs. It is a regional folk art that is timeless and dynamic.

How did Rosemaling evolve?

From rudimentary beginnings in the woodcarving decorations and religious art of the Middle Ages, Rosemaling first appeared in Norway during the Renaissance and Baroque periods of 1550 –1700.  Early examples, such as stylized plant motifs and acanthus scrolls, can still be seen in the traditional Norwegian churches dating from that era. In addition, regular trading of goods, with other countries in the Hanseatic League, provided the opportunity for East Asian influences to reach the shores of Norway and this provided further inspiration and influence for development of Norwegian folk art.

International trends in religious and modern art were relatively slow to reach the rural areas of Norway, and it was only as church furniture and fittings, (manufactured by the fashion-conscious urban craftsmen), were gradually installed in the country parishes, that new designs and ideas were introduced to the country folk.  Well-to-do farmers and Government officials and the fashion conscious, urban Norwegian elite were more heavily influenced by international trends in decorating and thus Rosemaling was confined mainly to the households and churches in the distant, rural Valleys of Norway.

In this relative isolation, rural Norwegian folk artists adapted the Renaissance inspired religious motifs and changed it to suit their own purposes. Over time, this folk art developed into an original style that evolved into a new art-form, with individual characteristics pertinent to each Valley. Between 1700 -1850, lavishly painted objects were often seen as status symbols. Therefore, itinerant or local folk artists were in high demand painting Rosemaling designs on cupboards, dressers, bridal trunks, saddles, harness parts, sleighs, and even clocks

The symmetrical designs of acanthus vine elements, so popular in the Renaissance era, were heavily influenced by Rococco trends from Europe, and later adapted by folk artists, finally emerging, in the Telemark region of Norway, as the distinctive ‘C’ curves and ‘S’ scroll forms, of Rosemaling, on an asymmetrical central root.

As the twentieth century approached, Rosemaling declined in popularity and it was only the political situation in Norway that saved it from complete obscurity.  Once Norway gained its independence, as a nation, there was, amongst the Norwegian public, a groundswell of interest in all things Norwegian, particularly crafts and painting. The revival continued throughout most of the 20th century and ensured Rosemaling had a promising future, both in Norway and in immigrant communities around the world, especially in the United States.

An opportunity to see the rich heritage of Norway should not be missed. By studying the Rosemaling in the Stave churches, museums and contemporary exhibitions in Norway, a folk artist can, like those painters in centuries past, become inspired to create individual masterpieces and hopefully, their own original style.

History and Art is Something Beautiful to Ponder About

53 thoughts on “A Timeless Norwegian Art”