Named after British explorer, James Cook, this place is as far from its namesake town locality as it could possibly be, so what is there to see in Whitby?

Join me for a walk and see….

You may have read about my previous visits to New Zealand, but it is Whitby, a suburban area, located north of the capital, Wellington, that featured on our walk today.

There is strong evidence of middle income suburban New Zealand, here, but Whitby also offers some unique but lesser known features, which I was to discover on a family walk among its well manicured streets.

Coniferous trees relish a cool, temperate climate, quite different to the sub-tropical flora my kin might see at home.

Seeing them along dotted along the littoral fringe and stream that bisects this town, our minds filled with thoughts of hobbits and elves and ‘Middle Earth.’

Well, we were after all, in New Zealand! 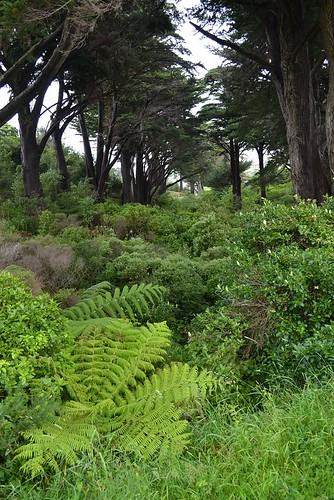 The path, to the right, next to the tunnel of trees, along the littoral fringe. 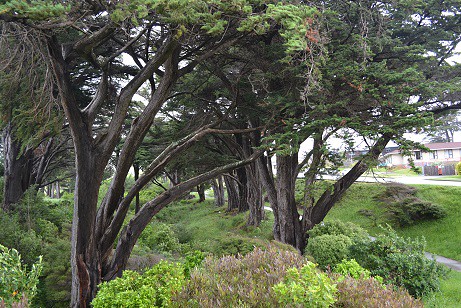 The flowers alone are worth walking miles for…. 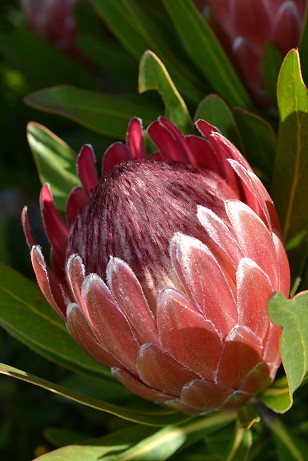 Plants like the Protea, above, and this spectacular hydrangea bush, that I struggle to grow back home, relish the cooler, more wet humid climate and seem to grow like weeds! 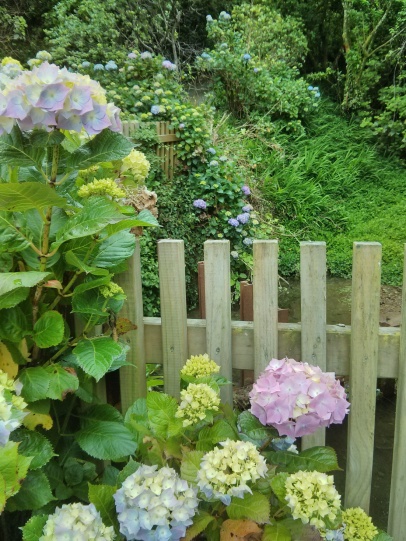 What is that definition of a weed?

Just a plant in the wrong place!

But it is not all trees and flowers we spotted on our walk.

The Kiwis are not at all overly formal in their manner, their sense of humour being evident in this unusual garden statue. 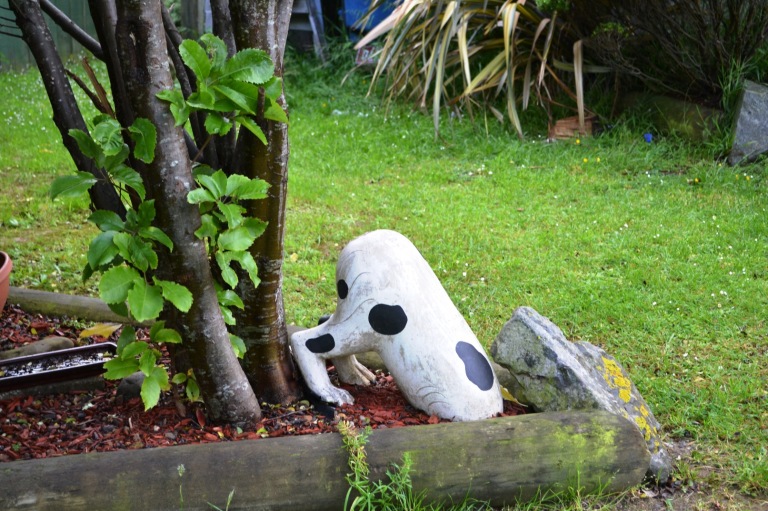 Besides being named after the British birthplace of explorer, Captain James Cook, the attraction about Whitby for me, was found in the unique, natural beauty of the surrounding mountains.

Visible from practically any street in this locality, it is easy to be mesmerized by the distant mountains which remind me of convolutions of a green Giant’s velvet brain.

Our walk encompasses a stop at a flat-topped Spinnaker Summit Lookout, at which the mandatory photo stop was required.

The mountains of green velour on the far side of the lake look as if a giant laid down a carpet and then slept on it, failing to smooth the grassy covers when he arose from his slumber.

One feels like you could rub your hand over them just to feel their soft, velour texture.

I have never seen hills like this anywhere else in the world.

It is said that New Zealand has some similarities to Norway, well, maybe not in this area….. 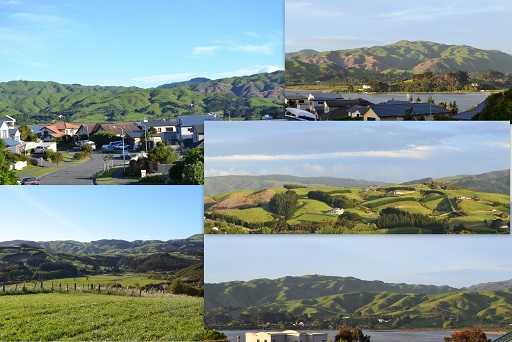 A walk around a suburban area often gives one a feel for the personalities who live there.

The diversity of boutique letter box designs was a delightful recurring theme in Whitby.

Walking further from the lake and Summit lookout, we spotted several Tui birds relishing the blossoms, hunting, as they were for some food.

This species of honey-eater is not under any threat, having adapted well to the urban environment in the North Island.

Wiki states that apparently the early European colonists called it the Parson Bird but, as with many New Zealand birds, the Maori name ‘Tui’ is now the common name.

After a good hour of strolling the suburban streets, Miss H and the young ‘uns were getting that glazed look in their eyes that said,” I’m soo bored” – you know the one that teens do so well, thus, a extension to our walk was quickly made to Adrenalin Forest, Porirua, on the outer edges of Whitby!!! Now it was the kid’s turn to dictate the direction of the “walk,” as the “Adrenaline forest” is an aerial obstacle course consisting of flying fox, high ropes, climbing through barrels, nets and steps, suspended above the ground, which makes for a fun and energetic few hours. The kids are harnessed with two dual locks, so it is impossible to remove both clamps from the harness at the one time, making it a perfectly safe activity, even for the most reckless individual. Furthermore, the attendants give full instructions and a good dose of practice on ground level before starting the course. 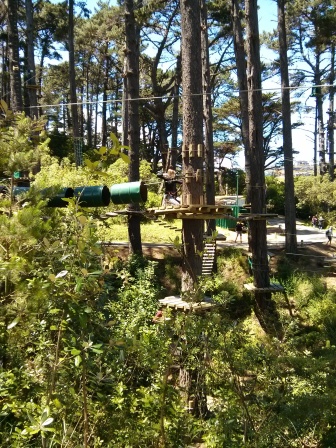 I venture to say it is a kids only activity, as I didn’t see any adults participating in the course.

The parents/carers were all down on terra firma, shouting encouraging thoughts above, who were hanging by the harness up to 60 feet above them in the tree tops.

The course becomes incrementally more difficult, and Miss 11 who was part of our group, piked out at Level 3, and had to be ‘rescued’ – which meant that an attendant had to climb a ladder and disengage you from the course.

Miss 13 and 16 kept going till Level 4, but were exhausted afterwards. A real endurance activity for some. 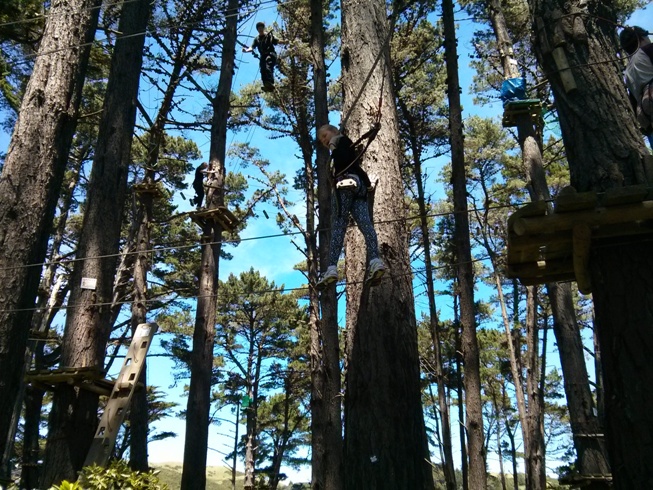 The Adrenalin forest is loads of fun if you are ever in Wellington, or Whitby surrounds.

Kids have exercise, fun, learn new skills, conquer their fears and the bonus is they are sun safe (in the shade) and cannot check mobile devices whilst they are up there!! I noted there was limited seating, (and nowhere to purchase refreshments) for adults who are watching, and the constant looking upwards was a posture most adults are not used to.

Like me, I suspect most of them could use a neck brace of sorts afterwards.

A philosophic Aussie writes here, one who will readily admit to loving Scandinavia. I'm interested in global politics but scratch the surface and you'll find a practical Environmentalist with an egalitarian bent trying to unleash a little creativity. Scandinavian culture, literature and traditions are close to my heart, even though I am Australian. Travel and courteous discussions broaden the mind, so I travel if I can. I'm an avid reader, I enjoy photography and a variety of crafts, particularly traditional art forms. I hope you'll find 'Something to Ponder About,' in this WordPress Community. View all posts by Forestwood

42 thoughts on “Walking Around in Whitby” 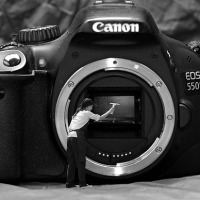 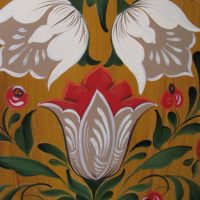 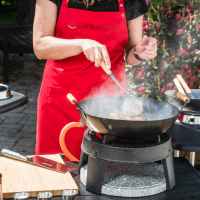