I leant out the car window this morning and had a conversation with a road cyclist at the traffic lights. I wanted to know why so many cyclists appear to choose NOT to ride on the outer or footpath side of the road, but position themselves on the inner side, dangerously close to where the cars travel. Ordinarily, this wouldn’t concern me, but it’s been a hot topic of whinging and conversation in the community, so I was a tad curious.

A simple enough question that had a surprising answer.

Road cycling is the most widespread form of cycling. It includes recreational, racing, commuting, and utility cycling. Road cyclists are generally expected to obey the same rules and laws as other vehicle drivers or riders and may also be vehicular cyclists.

Upon hearing my enquiry, this rather brash, lycra-clad rider put up his hackles. His stood tall on his bike, puffed his chest out, and his body language indicated he was ready for battle.

“It is not a dedicated bike lane back there,” he spat. “Read your road rules, love.”

I will admit Australia is slow to join the party when it comes to accommodating cyclists. The vast majority of major roads have no bike lanes, so cyclists must compete with trucks, cars, buses and all road users. Cyclists pay zero registration costs to contribute to the upkeep of the roads which earns the ire of the driving community. Rules vary from place to place but here we must keep 1 metre away from the bikes, when driving on the roads, due to the many cyclist deaths in commuter traffic.

Keeping 1 metre away would be simple if the cyclist kept to the outer or even the middle section of the emergency stopping lane, or roadside verge or bike lane, where there is one, but almost all seem to prefer to stick close to cars, which means the cars need to veer into the next lane, in order to comply with the 1-metre distance rule.

But I digress. Let’s go back to the discussion with the lycra-clad cyclist. As my intention wasn’t to debate the road rules, I clarified that I wanted to understand the motives behind the cyclist’s choice, so I persisted and, the traffic light was still red.

“On a Sunday morning”, he continued, “there’s so much glass on the road after Saturday night, that if I was to ride on the left (footpath), side of the road, I’d get nothing but flat tyres. So we all ride on the inside near the cars.”

As the traffic light then changed to green, I thanked him for the explanation and wound up my car window. His body language relaxed and he took off in another direction.

Yet, I was still left wondering – could there really be so much glass on ALL the major roads in our city? It just didn’t seem plausible. Is a flat tyre less preferable than safety?

Is this a problem in other countries without bike lanes?

Less than 30 minutes later, I was walking with friends along the beach with our dogs and recounted my story about the cyclist. We were all in agreeance, questioning the validity of the flat tyre argument, when one of the girl’s mobile phone rang.

On answering it, my friend let out a hearty laugh.

Her daughter had called to say she was on a bike ride on an inner city road and had just got a flat tyre!

Sometimes strange coincidences are not that strange after all.

90 thoughts on “Road Cycling and Safety” 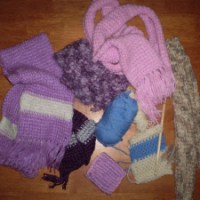